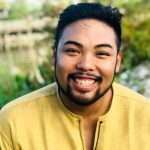 I’m an actor, singer and educator currently residing in Orlando Florida, completing my MFA in Acting at the University of Central Florida.

As a singer, I was featured in multiple classic rock/pop bands, singing lead vocals at major music events like Blue Angel and Gaslight at Winona, Minnesota. Other musical influences include RnB, Gospel, Soul, Jazz and Musical Theatre.

As an educator and acting coach, I’ve taught college level theater courses, acting classes ranging from elementary, middle and high school and have coached many students for their BA/BFA college auditions. Several of my students now attend the following universities: Saint Mary’s University of Minnesota, Columbia College of Chicago, Northeastern University and the University of Guam.

I enjoy making people laugh and traveling. So far, I’ve visited 20 states in the US, nine countries in Western Europe, and five countries in South East Asia. Having grown up on the island of Saipan, I love cooking a myriad of Filipino, Chamorro, Mexican, and other Micronesian cuisines.